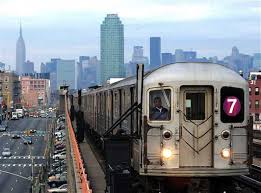 My first draft of a new story set in Queens, be kind!

“Oh, here,” Leila said as she picked up his metro card that dropped beside her, disrupting the rhythm of their silence as they walked up the stairs into the subway station.

David reached down beside her, the tan skin of his forearm mixing perfectly with his light grey t-shirt.  He reached for the metrocard with his hand, holding it carefully.

“Thought you might just take it,” he said holding the metrocard with a slight smile, only one corner of his mouth reaching up.  It reached up just like it usually did when he would say something a little too sarcastic and then recognize his error.  While other friends would look away with embarrassment, he could look kindly at you with a softening smile.  Now he looked towards her, and placed the metro card slowly into his back pocket.

David and Leila always took the same subway together every day.  The commute began from the elevator down through the various small high schools of the Vanguard Queens High School Complex, weaved through the three shwarma food trucks, migrated across Northern Boulevard with a loud swarm of high school students, and led up through the stairs to the 7 train.   They had last period together, and always walked behind one another through the beginning of their commute.  His smell decorated the walls of the elevator, sprinkled the air between the food trucks, and led her up through the stairs of the train.

Now they walked closer together.  She could hear the change jingle close to the pencil and pen in his pocket.  Leila felt a sort of safety walking this close to him. He had slight movements, that she responded to slightly.  It was something that she admired in them, the slight movements they had that could softly lead one another and an orchestra of people comfortably around them.

When the first train came they would take together, she pulled up a day’s newspaper spread out over the seats left from a morning commuter hours before.  She held one piece of the paper onto her lap next to her backpack and looked at it more closely.

“My dad taught me how to read the paper and fold it up so carefully as though he had never even read it,” she said.

“Show me,” he said, with the same kind of eagerness she would want to capture of his in her Snapple bottle at lunch as they sat together in the packed cafeteria.  He would ask her about Math class, how the numbers fit together today, how she fit between the chaotic adolescent drama.

He smiled. He smiled at the sound of her suddenly loud and then suddenly soft laughter as it bounced in between Court Square and Roosevelt stops, her hands weaving the paper around them making figure eights in the air. The reflection of the acrobatic paper mixed with their own reflections, her softly held up brown hair bun above her pale and pink faced reflection, his fall grey hat a smooth playful circle bouncing next to hers and joining them to the  concrete landscape behind them.

Her father would often ride the subway with her as a child, he led her through the crowds of people using the small space between her upheld arms and body as just the right sign to the strangers next to them that she was not theirs but his. Leila watched him carefully as he led her safely, she would pull her head up and wipe back her hair just to be able to watch him.

She placed the newspaper carefully on the bench, but a few pieces slipped out onto the subway floor following them out the door.   As they exited at Queensborough Plaza, David and Leila stood together and then moved to sit on the armrests of the worn wooden bench. David sat next to her.

From the left corner of her eye, she saw a policewoman dressed in a dark blue uniform.  David put his backpack on the ground just touching hers at the zipper.   He moved it slightly to the right, and then slightly to the left with his foot.

“Excuse me, can I check your bag?” The policewoman motioned towards David, putting a hand out for his bag.

He had a slow ordinary calm to him, as he took off his bag and placed it carefully on the bench.  He slowly put his foot down on the concrete, slowly placed his light blue backpack down, kept his face down.

Despite his slow movements the metro card fell out of his backpocket and fell onto the platform just to the side of the foot of the policewoman.

He began to reach for it but looked up to the policewoman’s face.  Leila didn’t recognize his low eyes and sulking shoulders, as he lifted back up without reaching his metro card.

“Random check,” the police woman mumbled hurriedly, reaching to the bag and stepping quickly down on the metro card and then up again to take a look at it as it lay covered with the grey pink of old gum left on the subway platform.

“Please,” said the chubby police officer louder this time, her voice reaching and echoing through the platform and motioning with her shaky arm to the sidewall, “put your hands over your head, and lean against this wall while I look through this.”

David moved slowly taking each step carefully towards the grey wall, keeping his gaze to the ground and on the card.   Other passerbys looked towards him.

Leila wanted to fall to her knees and reach across the police woman.  She wanted to grab the metro card, feel the rough surface of the platform pavement tear at her skin.

She glanced down, and noticed how David’s white converse lit up the floor but stood small compared to the black leather of those of the policewoman.  David put his arms back down to his side and stood in front of the policewoman, the woman had a belt of armor, he had just his hands in his pockets.

The passerby’s gazes looked past them to the N train as it turned quickly around the bend towards them on the platform.

Words from the newspaper seemed to join her there in the subway and also must have joined the other commuters who passed David, his converse, his arms against the wall. This was just the way it was in this city. The cruel ordinariness fell heavy on her feet and kept her there on the pavement across from him.

“David,” Leila said loudly, her face beat red with each word as she pushed to say it over the screech of an oncoming train and then quietly, “I should.”  Leila motioned to the other side of the platform to the next train on their commute.

“Yea,” he answered, his eyes still down towards the ground and the bright yellow blue of the card. “I’ll see you tomorrow.”

She immediately heard the quiet inside the train.  Not the loud echo of the policewoman’s radio or the screaming whispers of the passerbyers.  The train moved from 36th avenue to Broadway and she saw her own reflection, the frizzy curls now sneaking out from the bun on her head, and with it a piece of newspaper flying through the train.  Her reflection with David just moments ago blurred with the Long Island City apartments in the background, his grey fall hat next to her unraveling bun.

At lunch, she walked down the hallway and saw him coming towards her.  He wore the same color pants as yesterday and kept the same rhythm to his step as the rhythm of the train stairwell.  She slowed down as he approached.  The people in the hallway kept their fast pace and moved around her.

He was about to enter the lunchroom as the students maneuvered around him.  His dark blue shirt fit perfectly with the light lockers beside him but when she saw him she saw the grey of the subway platform.  The brown of the bench as she looked down.  The dirty white of the gum on the platform.

She stopped just short of the entrance. He glanced quickly at her, and then looked towards the door.  She stood up right a bit more- trying to take up the space between yesterday and today.

She shifted her weight away from the stiff locker.

“No problem- it sucks to be brown sometimes,” he said his eyes low and focused and on the door ahead of them.

She let the words stand around her.  The eyes of the others on the platform, the police woman, they all poked out from behind the lockers.

“I should have said something,” she said.

“What? What would you have said?”

“It’s not fair,” the eyes stared out from behind the lockers, blinking rapidly at her, as David walked toward the lunchroom.

He sat in their usual table.  His feet laid out on the bench across from him spread with one leg far from the other. There was a small amount of space where she normally sat.

“What this make you uncomfortable?” he laughed quickly.  Moving his foot a little closer to her.

She tried to laugh with him, but could only feel his laughter and his foot against the side of her.

“It’s just—“ Leila moved a little more to the right side of the bench.

He took his bagel and cream cheese out from his bag, the cream cheese had fallen out and spread itself on top of the bagel.  The bag was sticky in his hands, but he casually dropped it onto the table.  His lunches often had one ‘spilledness’ to them as they had named it together, a stray carrot in his bag, peanut butter on his books.

“You’re always sensitive,” he said moving his legs back down to the floor.

He looked up at her without expression, “Why were you so surprised?”

She looked down at the bag of cream cheese.  The screech of the subway platform seemed to find its way into the room. The uneasiness of yesterday right there amongst the lunch tables.  She was of course surprised.   Words in a newspaper may have told her but there this had just joined them on their commute together.

“That’s the problem,” he said dropping the bagel onto the bare table.  “You’re just afraid.” His foot moved farther from her under the table.

“What am I supposed to do? Just run away each time I see a police officer? Avoid the subway? Take buses more? There’s no use in being afraid,” he said, his hat fell a little more of his eyes as he spoke, looking more like her own father.  She could feel the sincerity of his words and knew he had thought of them since yesterday. She imagined that perhaps she could once have the strength that she heard in these words.

She reached out to pick up a chip that had fallen out of his bag of chips.  She flicked it towards him, and looked up towards him.

“Is this one of the tricks your dad taught you,” he said, softly smiling at her.

She smiled back and looked down towards a piece of chip that fell to the ground beside them.

19 Sep This entry was published on September 19, 2013 at 1:20 pm and is filed under Uncategorized. Bookmark the permalink. Follow any comments here with the RSS feed for this post.

Older: Coffee and a Call
Newer: At the end, when you speak