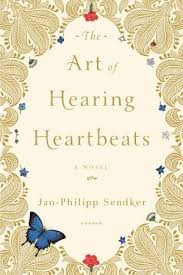 In the coming months, the two spent every market day together, exploring Kalaw and its vicinity as if they had discovered an uncharted island.  They investigated the place with the meticulous care of two scientists, street by street, house by house.  Often they would crouch for hours by the side of the road.  On most of their expeditions they covered little more than a single street, a bit of meadow.

Over time they established a fixed ritual for unlocking the secrets of this new world.  Having taken a few steps, they would pause, silent and motionless.  Their silence might last a few minutes, half an hour, or even longer.  Tin Win was soaking up the sounds, tones, and noise.  Then he would describe in detail what he heard, and Mi Mi would tell him what she saw.  Like a painter she sketched the scene for him, at first roughly, then with increasing precision and detail.

I love how Sendker brings us these two characters guiding one another through the streets of their world. It’s a beautiful way to demonstrate connection.  When two people meet the curiosity for the rest of the world around can be peaked by their meeting.

22 Apr This entry was published on April 22, 2014 at 7:30 pm and is filed under Writings by Other Authors. Bookmark the permalink. Follow any comments here with the RSS feed for this post.

Older: The Market
Newer: Well, I Love You