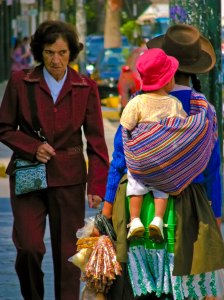 the wall was not of stone, nor wood, nor cement, not any building material

A thick wall about 2 feet thick divided the town.  It had developed slowly over time. Stone by stone.

What might seem strange to you as the reader- someone who has never seen or ever realized they may be on one side or another of a wall- the wall was not of stone, nor wood, nor cement, not any building material.

The wall if you look close was made of words- dirty words like curse words and derogatory words.  You could see the capitalized letters serving as cement between the words, and the exclamation points sitting out of the sides.  Next to the long, short, and cursive words, there were eyes.  Some eyes closed, some eyes crying but the wall was mostly made of angry and closed eyes.

People drive by on both sides of the wall.  On one side large minivans pass. The kids inside usually don’t notice the wall, their videos play on the seat in front. The moms don’t notice either. Their cellphones play on their ear, and their reflection on their eyes as they check their overhead mirror.

On the other side buses zoom by almost hitting one another like a game of constant hockey on the main roads.  The kids peak out from their seats seeing the reflection of the videos from the car.   The moms know the other side they spend most of their day there.  But now on this side have turned their head away from the wall and look down at their children, who don’t notice their mother’s glances as they look across the wall.

20 Jun This entry was published on June 20, 2011 at 1:44 am and is filed under Fiction Writing by Jessie. Bookmark the permalink. Follow any comments here with the RSS feed for this post.

2 thoughts on “the wall was not of stone, nor wood, nor cement, not any building material”